AltimeterThree is a tiny flight altitude recorder controlled by your smartphone or tablet. By pressing a button on your mobile device, you can ask it to start recording. After flight, the recorded altitude data is downloaded to your mobile device, where you can view, annotate, and share with friends. For certain sports it also records acceleration up to 24G in three dimensions so that you can analyze your flights in even greater detail.

AltimeterThree requires a smartphone or tablet with Bluetooth™ running the AltimeterThree app from the Apple or Google Play app stores.

We suggest you install the app before purchasing the altimeter, to make sure your device is compatible.

AltimeterThree is a flight altitude recorder that is controlled by your smartphone or tablet.

If you would like to collect and share flight data, then this is the altimeter for you. It is small enough to go almost anywhere, and it can used for almost any flying activity.

It captures your notes and observations on each flight.

You can view an interactive graph of altitude (and for certain sports, a climb/sink and/or 3-axis acceleration) and produce a Microsoft Excel™ spreadsheet of flight data for further analysis.

If GPS is enabled on your phone, the location of each flight is saved, and can be viewed on a map.

AltimeterThree includes a recharging cable, and can be recharged from any USB port.

We suggest you install the app before purchasing the altimeter, to make sure your device is compatible.

Start and stop recordings using your phone or tablet. Flights are automatically downloaded when you stop the recording. 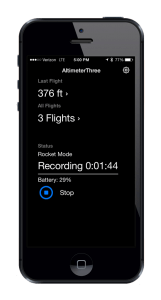 Pinch and zoom to see detail of your flight.
In Rocket mode, AltimeterThree even measures descent rates before and after Chute Release opens your parachute. Great for improving your parachute folding techniques. 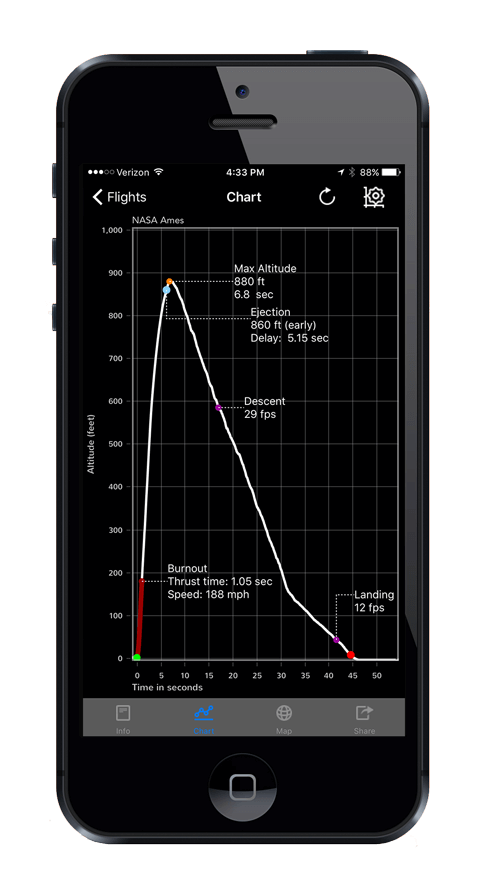 If you have GPS enabled on your mobile device, each flight will stamped with its launch location. 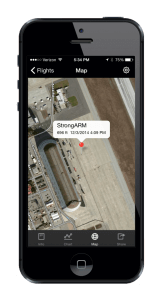 AltimeterThree saves your notes on each flight. Jot down weather conditions, equipment choices, and notable events. 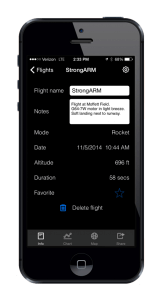 Whatever you fly, AlitmeterThree is ready. Handy modes for each activity, including Experimental. 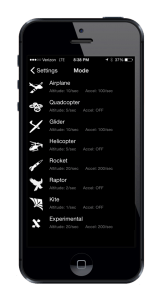 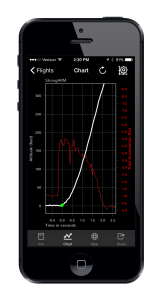 AltimeterThree will update its firmware wirelessly and automatically from your phone or tablet so that you always have the latest features. 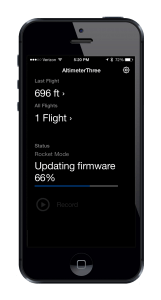 Data, or It Didn’t Happen

With a tap, you can send yourself or colleagues a Microsoft Excel spreadsheet of pressure, altitude, acceleration (in 3 dimensions), and all of your flight statistics.

Thanks to those of you who shared your flights with us!

The full-color User Guide for AltimeterThree is available here.

Venting: Since AltimeterThree uses a pressure sensor to measure altitude, it needs to be exposed to outside air pressure. If you are using AltimeterThree in a rocket, you will need to add three vent holes around the fuselage or payload bay in a place that won’t be blocked by the nosecone or the parachute.
To maintain the health of the rechargeable battery, recharge AltimeterThree every six months whether you use it or not.

Wireless setup is never fun, but hopefully our Bluetooth Setup Guide can make it easy.


Tip: Frequently the best way to re-connect with AltimeterThree is via your mobile device’s Settings>Bluetooth, rather than the app.

The button on AltimeterThree is used to turn it on and off with a quick click. Usually, that’s all that you will use it for since your mobile device will be used as the primary user interface for AltimeterThree.

When AltimeterThree is recording, a quick click ends the recording. This is handy if you’ve lost your Bluetooth connection and you want to end the recording. Once you reconnect, the flight will be downloaded.

Holding the button down for a longer time (~10 seconds) will display “Resetting” on the LCD. It will close the Bluetooth connection (if one is open) then restart the altimeter, with autoconnection disabled. This is useful when you want AltimeterThree to stop autoconnecting to one device (like a phone) so that you can connect it to another (like a tablet).

AltimeterThree will automatically turn off after two hours of non-activity if you are not recording.

Check out our Bluetooth Guide for help in pairing and connecting your AltimeterThree.
Bluetooth Setup Guide

If your Bluetooth has difficulty connecting:

On the mobile app, press the settings icon whenever you would like to change the units (feet or meters), the recording mode (quadcopter, plane, glider, rocket, helicopter, kite, raptor, or experimental), or edit the “If Found” info that appears on AltimeterThree when it is turned on. The If Found information (usally a phone number) helps people return your altimeter to you if you lose it.

AltimeterThree has an internal Lithium Polymer battery that you recharge using the included USB cable.

The battery should last for up to six hours of flying, and can be recharged in about an hour.

When you plug your altimeter in to charge, you should see a red light:

When charging is complete, the light will turn green:

If you see BOTH LIGHTS at the same time, you battery has come disconnected or needs replacing.

Your battery should be fine for years of use. If you see both lights, please see our repair guide:

AltimeterThree was designed to be easily repaired.

Repairs you can do yourself are:

Simply order parts from our store, and follow the instructions in the repair guide.

It might be a good idea to read the repair guide before you order, to make sure that you are comfortable performing the repairs.